C. Rhythmic variation. If you have a assage of even sixteenths (or any other note value) you can substitute new rhythms for the written ones. This enables you to learn more quickly, because the longer note values give you time to think, and the quicker values force you to act. Consider the same Mozart quoted above:

D. “Working back” method. Our usual inclination is to start at the beginning and work to the end. Thus, beginnings of pieces or of sections are more polished than endings, and we break down in the middle. Sometimes it’s better to start at the end. This is particularly valuable when the music has an accelerando, because the most difficult part is the last.
The following is from the piccolo part to Ravel’s Daphnis and Chloë: 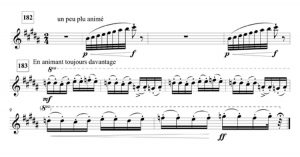 Practice only the final beat (G-G-F-G); then, add the previous beat; work your way beat-by-beat back to the beginning.

This technique is also useful for long passages which one must play in one breath. In the following example from Bach’s Sonata in E-flat Major, play only the final measure (meas. 22) before the breath, stopping on the downbeat of meas. 23. Then play meas. 21-23. Work your way back one measure at a time until you play the entire passage. 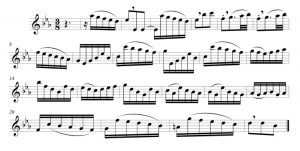 Of course, the reverse process—working forwards bit by bit—also helps.

E. Overlapping groups. These arpeggios are from Prokofiev’s famous bird solo from Peter and the Wolf:

First, practice each beat separately (see below, A); then each half measure (B); next, each measure (C); finally, the whole passage (see above).
A.

A more compulsive version of this method is practicing all adjacent groups of two, three, and four notes; play each group as fast as possible, but cleanly: 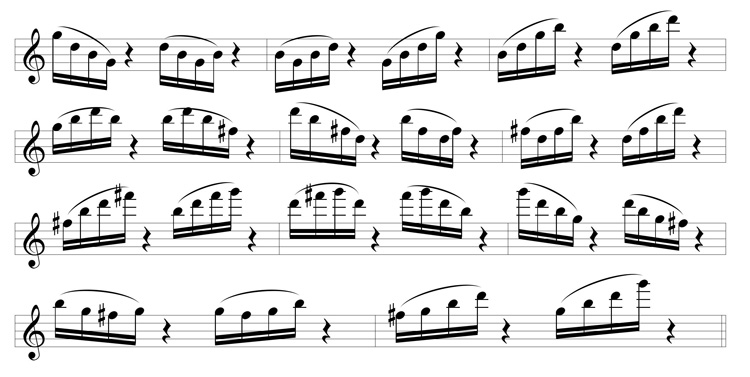 To complete this process, practice all adjacent groups of five, six, seven, etc.

Practice the opening to Ravel’s Daphnis and Chloë (the first and second flute parts are below) by setting the metronome on 100. Practice two notes to the beat, then three, then four, and finally six, which is the performance tempo. In addition, practice thinking of each group of six subdivided into two groups of three or three groups of two: